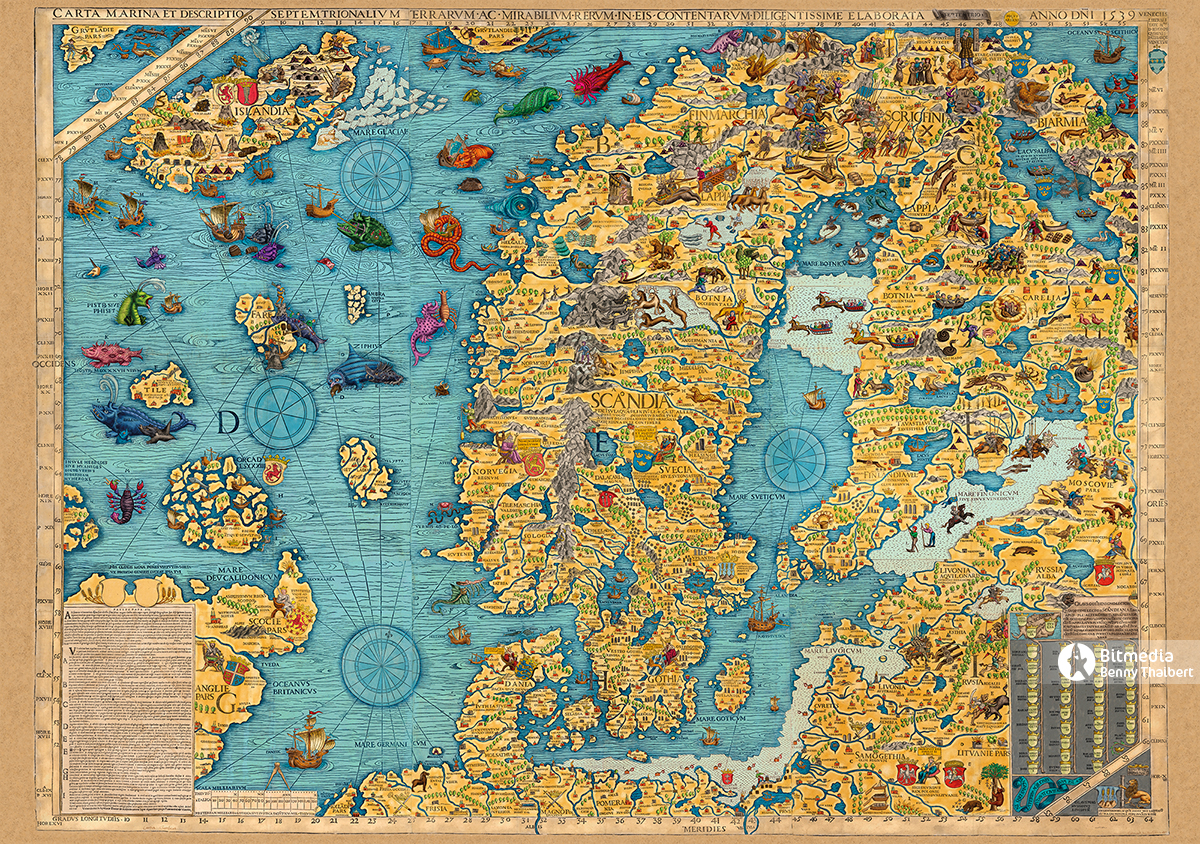 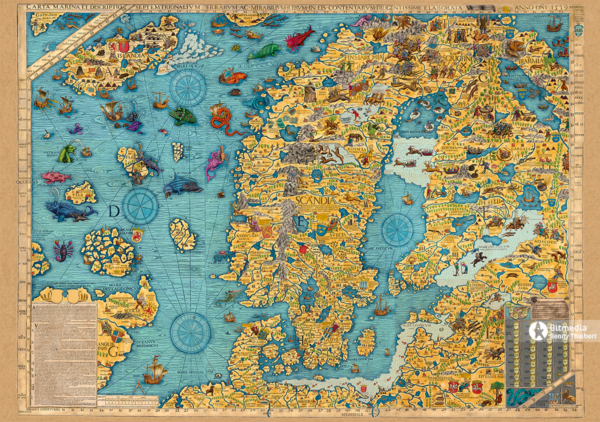 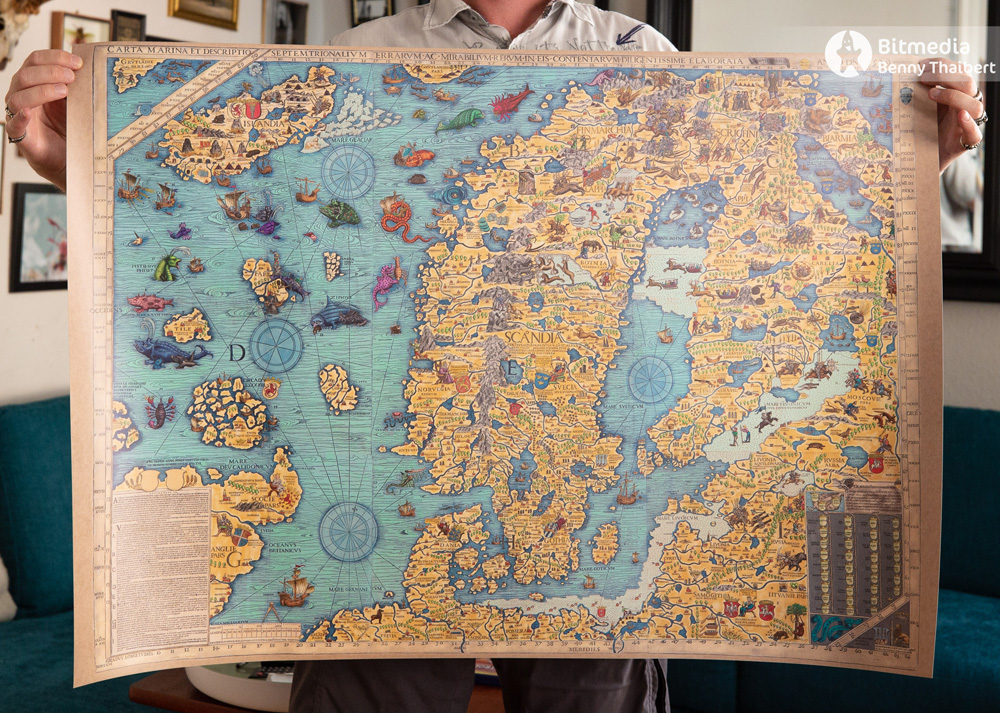 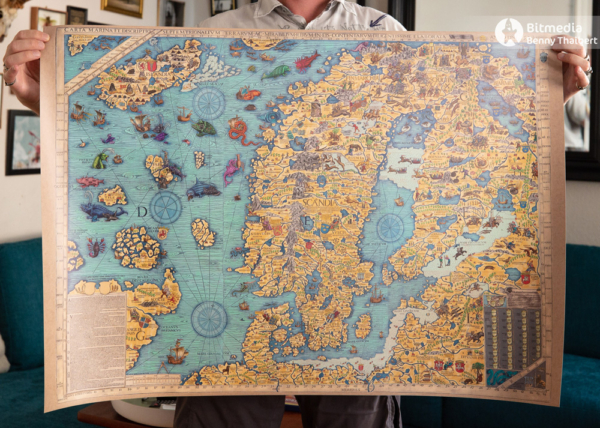 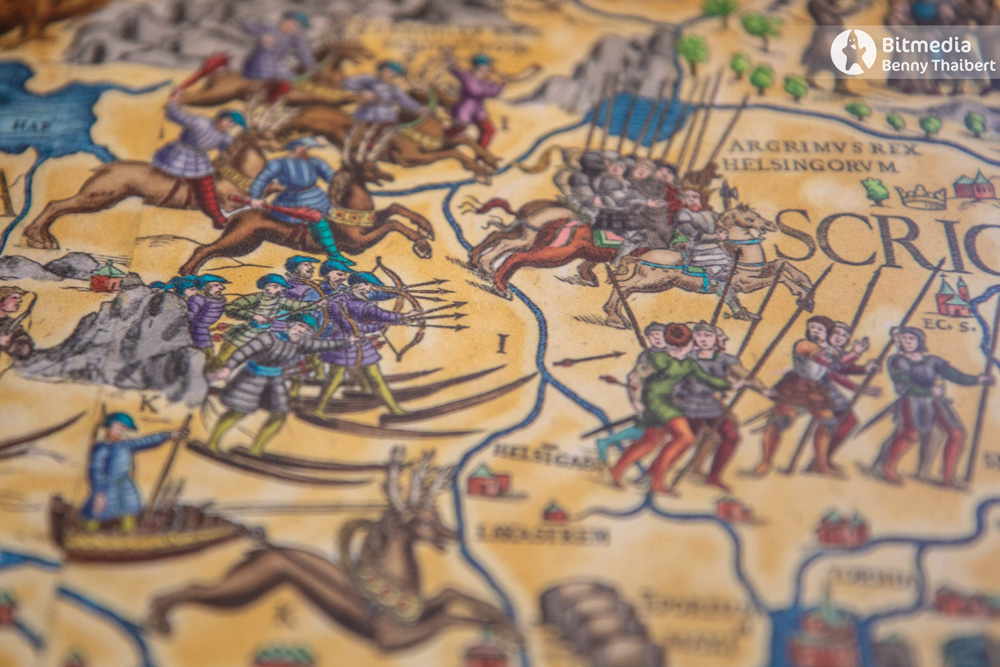 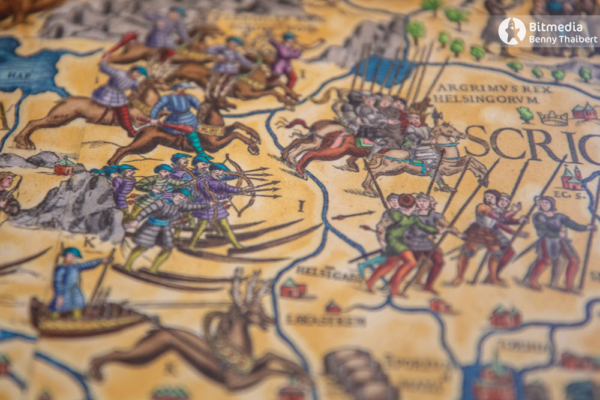 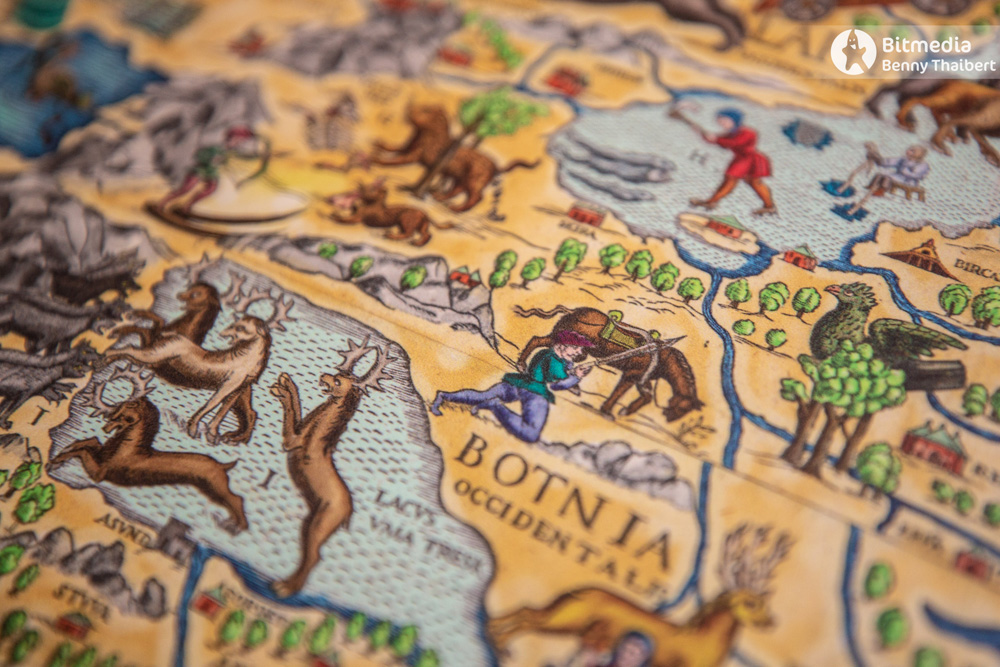 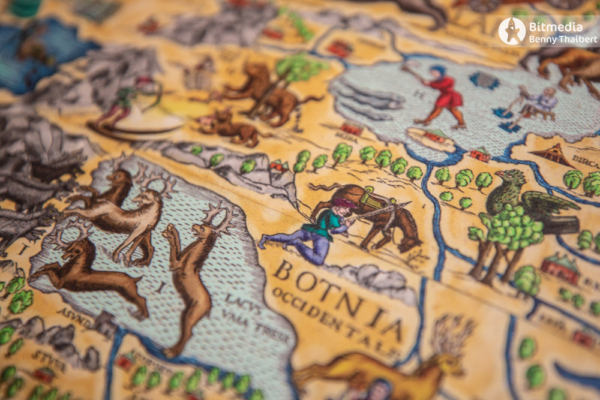 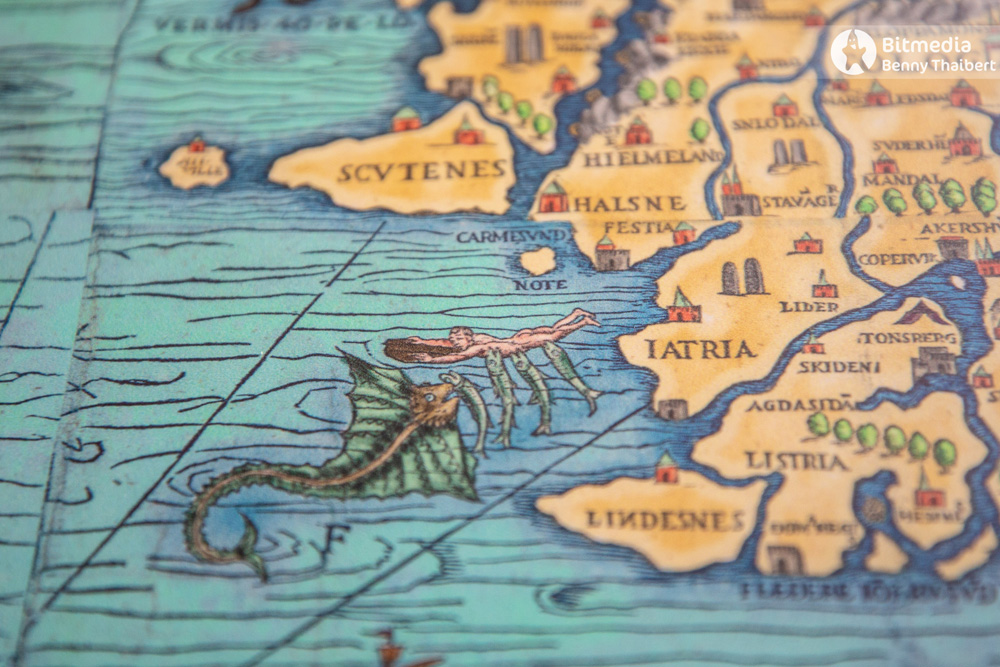 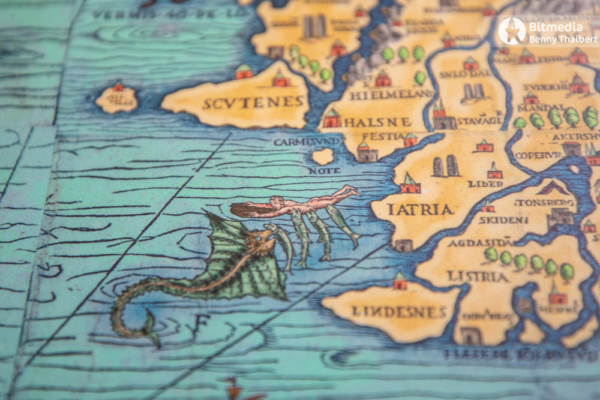 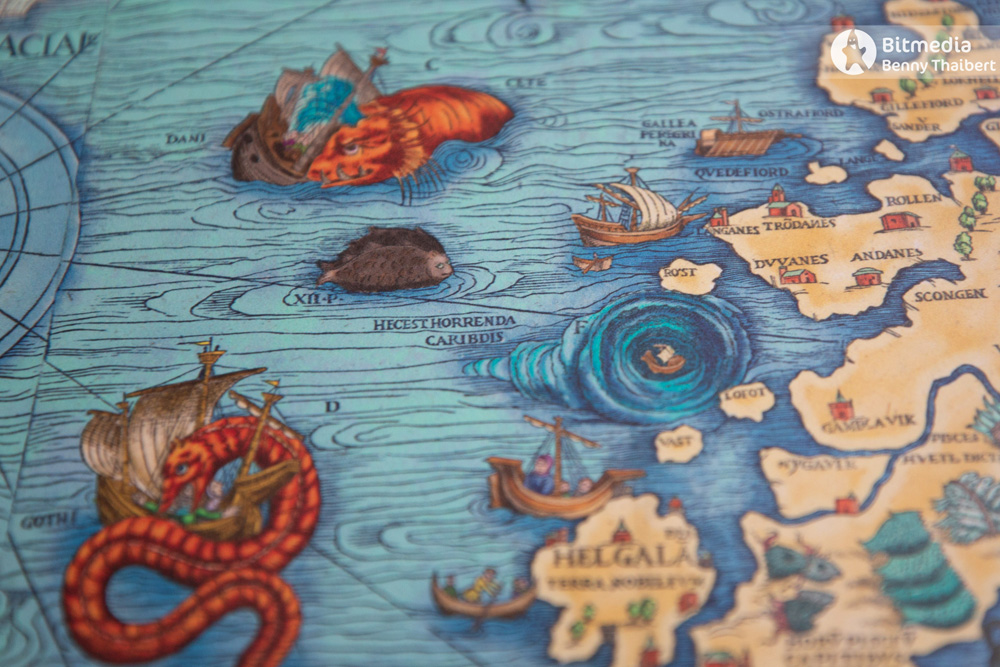 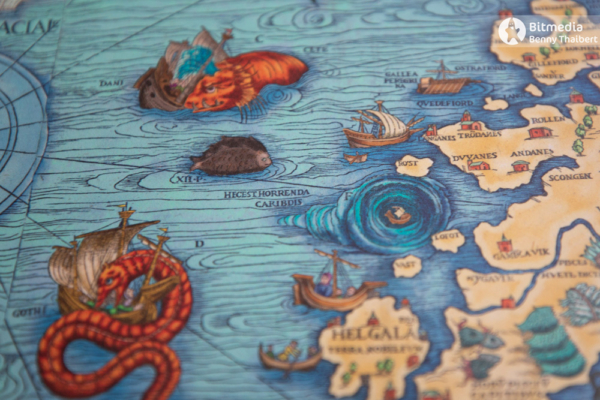 Since childhood, I have been fascinated by old maps. The weirder the better. It gave me an understanding of the perception of the world. And I did draw several fantasy maps myself! But one map above them all is the Medieval Monster Map from 1539: Carta Marina!

I loved it! It’s so rich in wonderful illustrations of battles of armies, warships, hunting, farming, religion, fishing and animals doing stuff.

Olaus Magnus who did it, said:

“I wanted to give a description about the marvelous things, both on land and at sea, in the old Gothic realm and the other cold northern countries beyond the North sea, mare Germanico, until now unknown”

The map originates from 9 now lost wooden blocks. The resulting papers are 55x40cm giving a map size of whopping 125x170cm. The poster I made is adopted to size 100x70cm. Then it will fit in any standard type frame that size.

I obtained a digital version of the map and decided to colorize it. To put better emphasis on all the action around the map. You see several combat situations, harvesting, means of transport, religion, industrial areas and animals doing stuff.

The colorization was handmade with custom made brushes in Adobe Photoshop. I wanted the overall look to be old fitting the carving styles and time. It took me several tries to get the right colour combination and thus feel of the map. I used hardware and software able to simulate brushstrokes to accommodate the best vintage feel in the map.

The digital version is taped on the edges with some grey canvas tape. I removed the edge and made a new paper looking space around the map. Just for a better stylish finish on the edges.

And many many many hours later I finally finished the colorization of Carta Marina in the digital realm.

The digital original is a rather big file of 3 GB. My finish version ended as a elephant file of whopping 6 GB.

Your print of Carta Marina

The printed version I offer to you has a size of 100x70cm. It’s a standard size for frames.

I scaled it down to fit this format.The original size of 125x170cm tends to be too dominant. However, I also tested smaller versions and it did not accommodate all the fine details well.

Other replica and the Uppsala version

There is different replicas in circulation. The best preserved is the black and white version now in Uppsala. Another popular version is a replica made in 1572 by Italian Antonis Lafreri as a cupper engravery. The Lafreri version has reduced illustrations.

The originals was lost during time and the Lafreri reduced version was the only one available. Until 1886 were a print was found in Münich. In 1962 another paper copy was found in Schweitzerland. Uppsala university purchased this, and made scanned digital version available to the public domain. The original map from Uppsala universitetsbibliotek is also for sale in a black and white scanned version. Size 61x85cm.

What is a woodcut print?

I found this video showing how the wood cut prints are made. This applies to how the surviving 2 maps of Carta Marina was made.